Sitting at a sidewalk café facing the main square of Castelnau-Montratier, I watch a few pensioners play pétanque under the trees. A player with a beret at a jaunty angle calculates the distance to the cochonnet, a small wooden ball used as a target. He lifts his arm, aims the boule and throws it. It lands a foot from the cochonnet. It’s his opponent’s turn to throw. Will he win the point?

The coffee is strong and aromatic, the warm breeze caresses my face, conversation flows easily.

Castelnau-Montratier is one of the bastides that pepper the French countryside. It is in the Lot department in the southwest of the country. Roughly, a bastide is a medieval new planned town, built to control and defend the population more easily and to foster trade. And hence raise more taxes, of course.

Later, the onset of the Hundred Years’s War brought about the fortifications we see today. Like Castelnau-Montratier, these towns were built on the sites of existing villages or on Roman crossroads. Most of them follow a grid layout with a square, the commercial hub, at its centre, usually with a church across from it too.

Most bastides preserved their medieval features intact and some are among the prettiest villages in France. The majority are located in the Southwest and date from between 1200 and 1400 AC. Many are stops on the Way of St. James. You’ll be able to tell which ones thanks to the effigy of a pilgrim wearing a scallop shell, a cloak, a staff, and a hat.

Let me show you some of the most beautiful bastides we’ve visited on our drives in this beautiful part of the country. 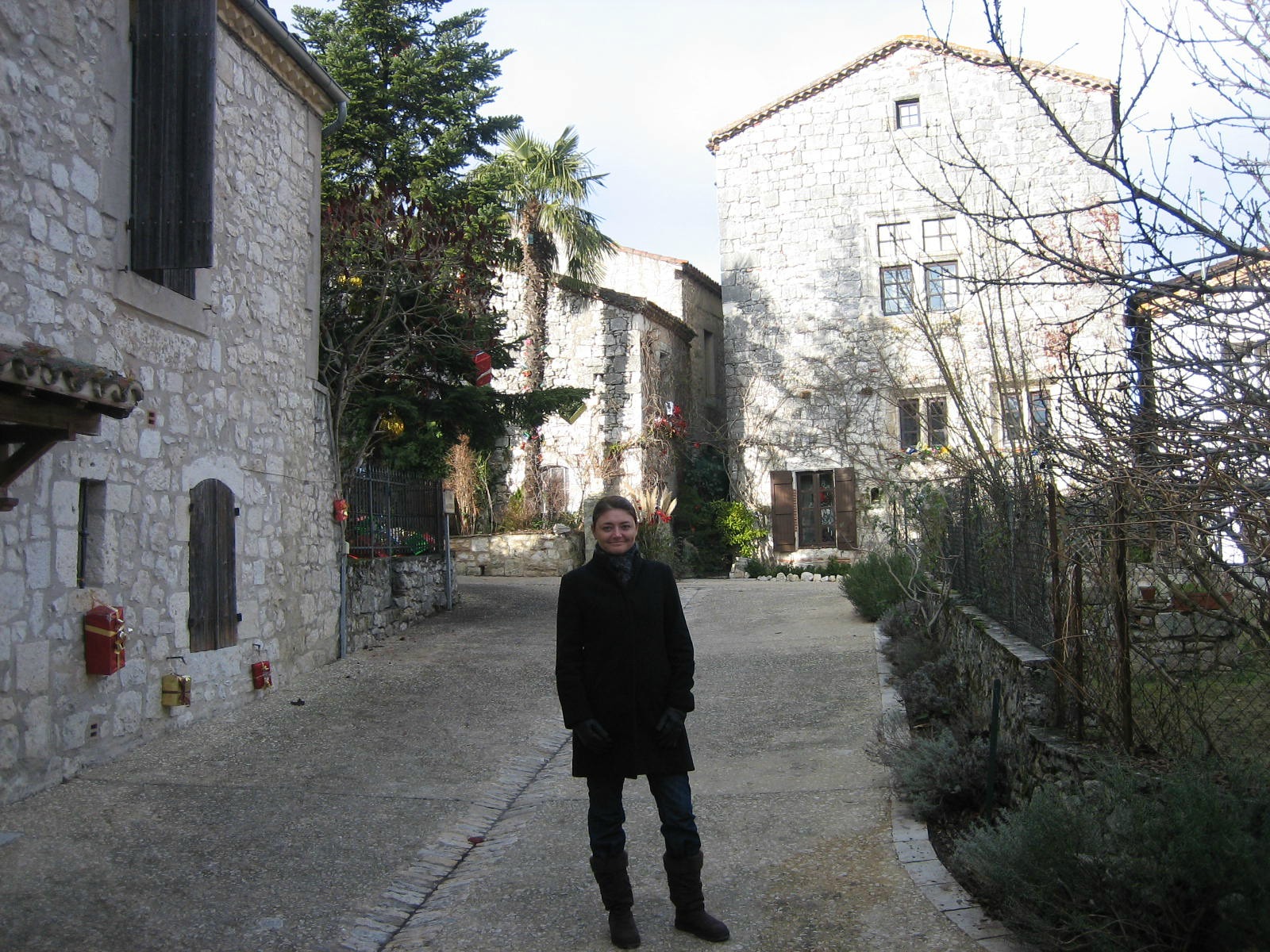 Pujols, in the Tarn-et-Garonne department, was one of my favourite bastides. It’s a beautiful small village built with a local blonde-coloured stone. All the houses had pretty gardens and lots of flowers on the window sills. Pujol sits on a hill and commands stunning views of the surrounding countryside. We walked around a bit and sat down for coffee in the square in the centre of town. 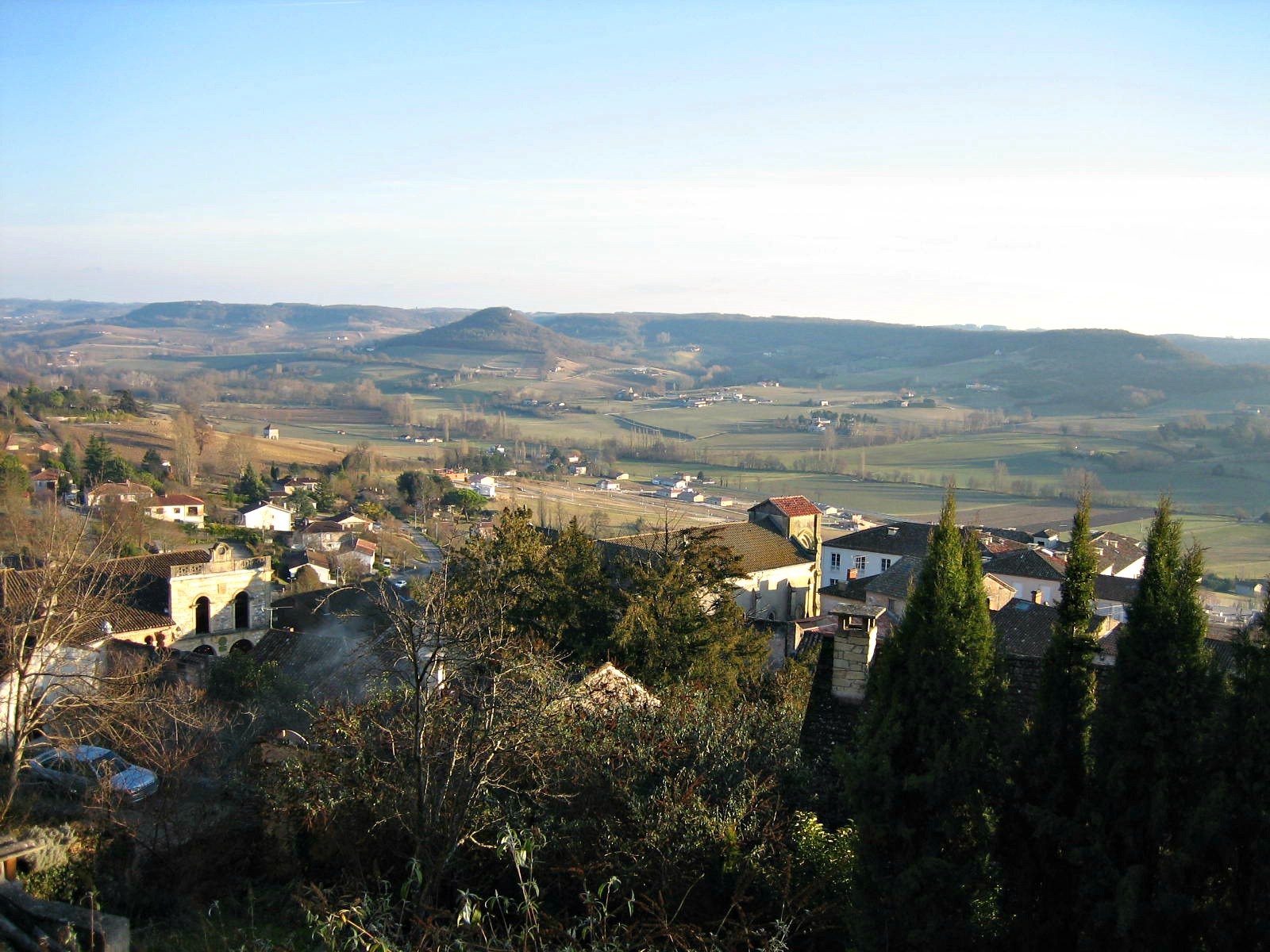 Penne d’Agenais, in the Lot-et-Garonne department, used to be a stop on the Camino de Santiago (the Way of St. James), the system of routes that took pilgrims from northern Europe to Santiago de Compostela in Spain.

Built on a hill, the town’s roads spiral upwards towards the Basilica of Notre-Dame du Peyragude and the ruins of an ancient castle. Built between 1897 and 1948, the basilica is relatively recent and replaces previous buildings lost during the Albigensian Crusades, the Wars of Religion, and the Revolution. The streets are rather steep, so be prepared to climb them if you want to enjoy the sweeping views from the top. 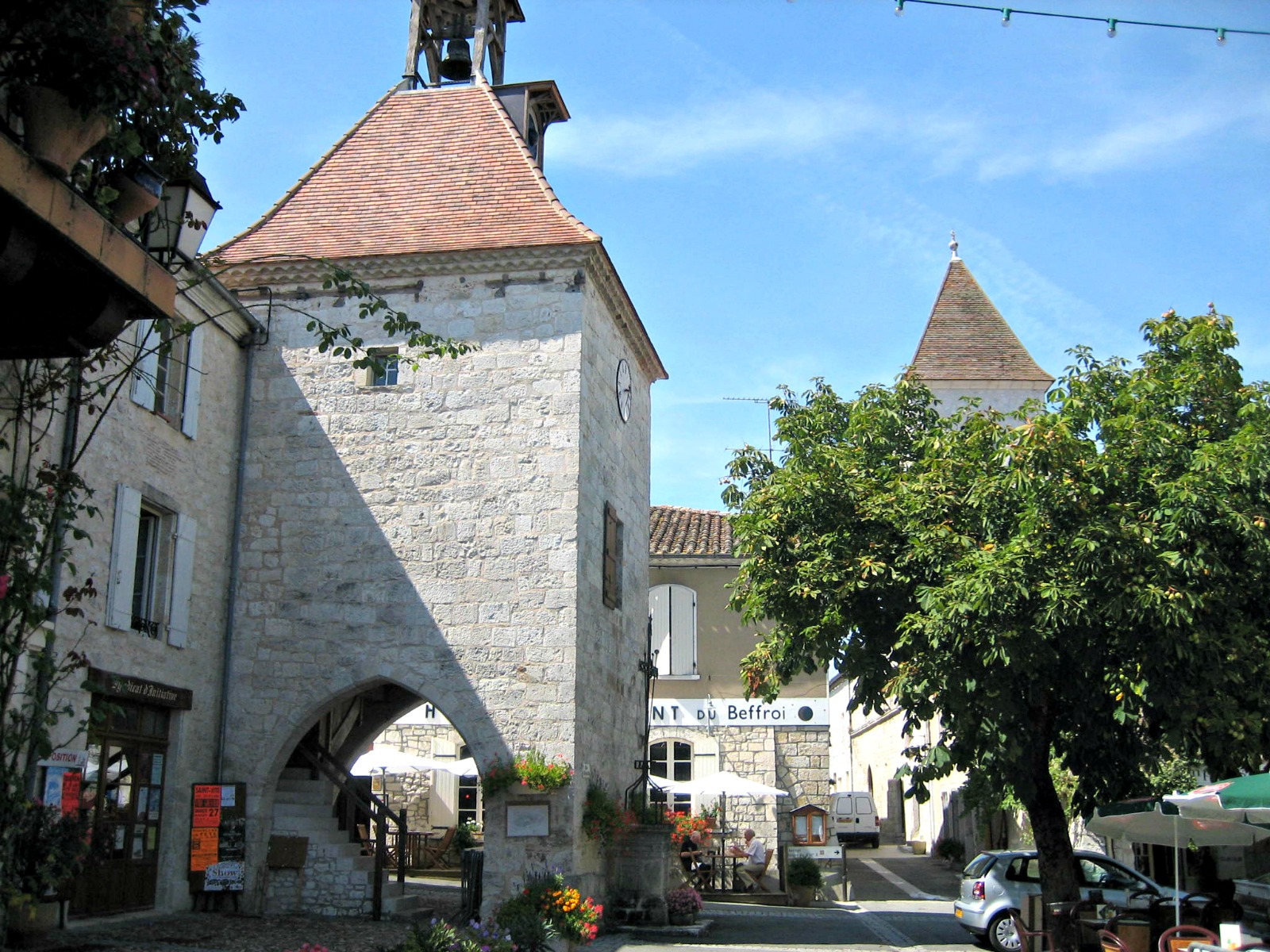 After a relaxed lunch in the Place des Corniers, we strolled around this bastide royale from the 13th century. The square is surrounded by the town hall and a 17th-century bell tower with a lunar clock added in the 19th century.

We walked along the ramparts and admired the beautiful views of the intensely green countryside below, as Tournon d’Agenais is also perched on a hill. A pretty public garden with a war memorial occupies the location of a destroyed castle. A sobering reminder of the sacrifices of war. 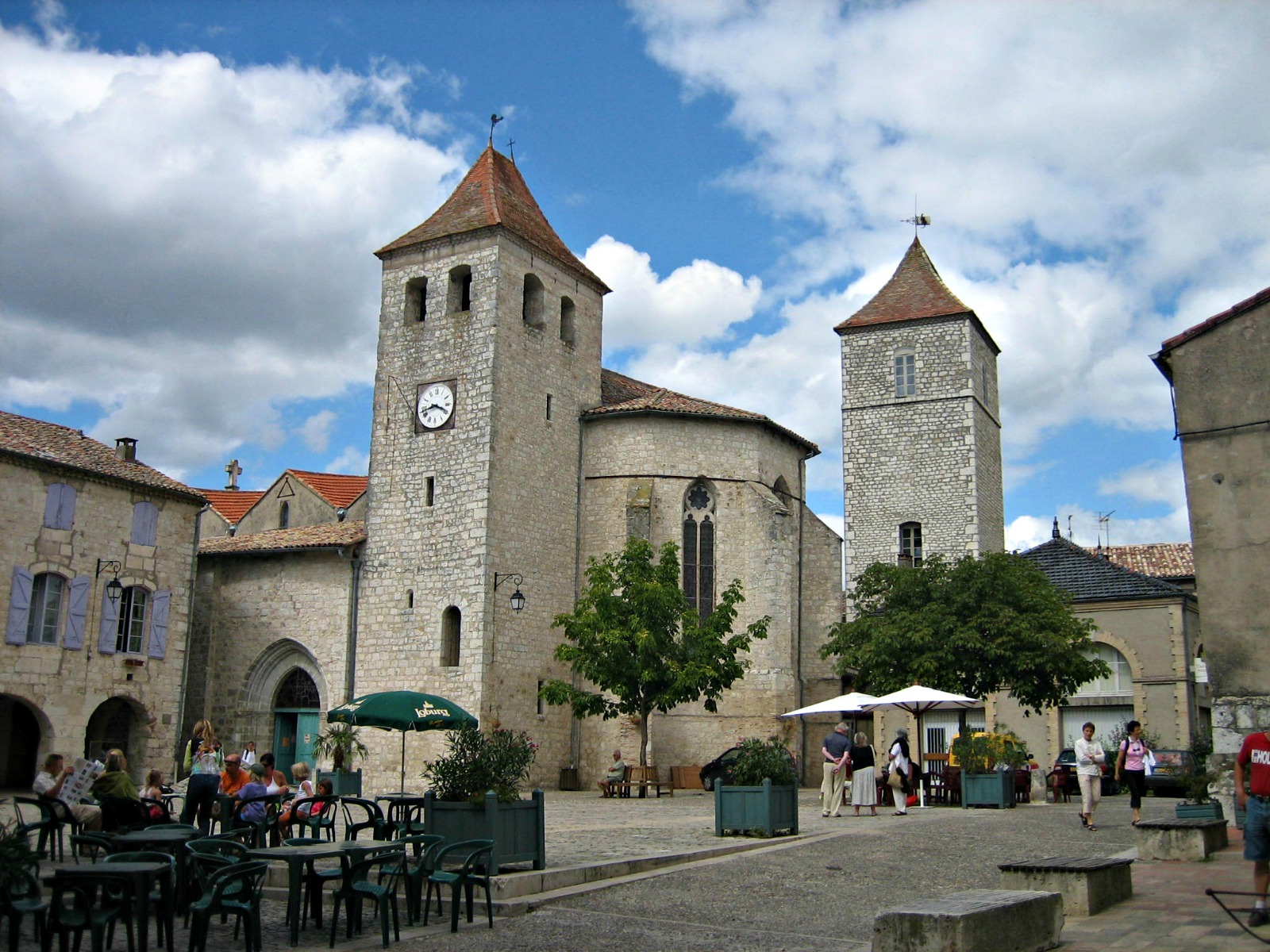 Like Tournon d’Agenais, Lauzerte is in the Tarn-et-Garonne department. The Count of Toulouse had bastide of Lauzerte built in 1241 and was also a stopping point on the Camino de Santiago. Beautiful stone houses with brightly painted wooden blinds and cheerful flowers on the window sills surround the square.

If you go, look up at the iron signs outside the shops, they represent their trade. The Saturday morning market at the main square, Place des Cornieres, is lively and fun and echoes the medieval way of life. Lauzerte is a stopping point on the pilgrims’ way too. The Pilgrims’ Garden memorializes the thousands of people who did the Camino over the centuries. 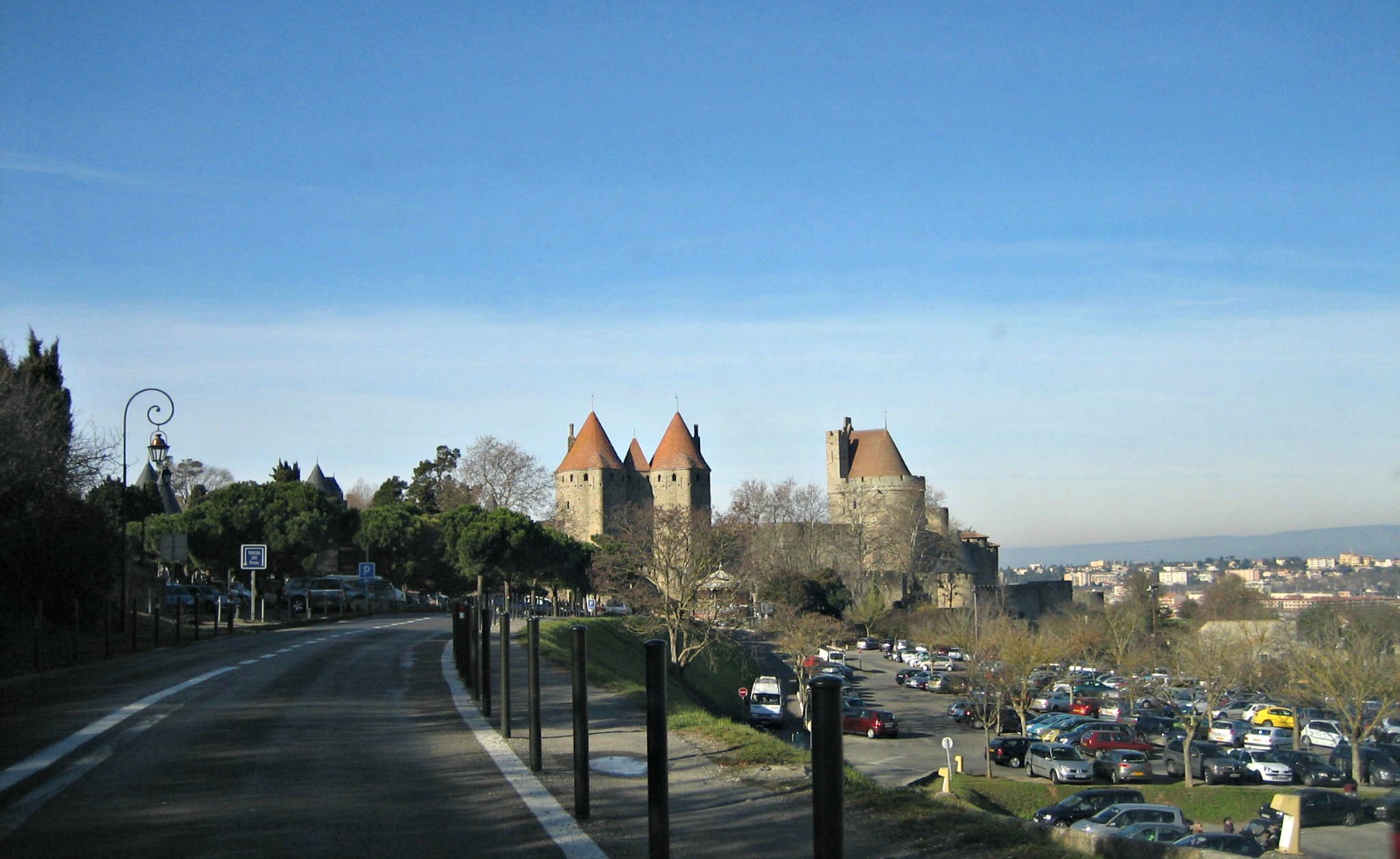 Carcassonne, in the Aude region, is perhaps the most Disneyish looking medieval town I’ve seen so far. The reason it looks so pristine is because it was extensively restored in the 1840s. Those in charge of the restorations based their work on an idealized view of the past.

The UNESCO declared Carcassonne a World Heritage Site in 1997. We wandered around the maze of cobblestone streets, admiring the gorgeous old buildings and the great views of the Languedoc plains from the battlements.

Although Carcassonne looks a bit too perfect, it is still beautiful and worth a visit. We went on a blustery winter day and found the perfect remedy for the cold. A plateful of steaming cassoulet, the traditional slow-cooked bean, pork and duck casserole from the south of France, warms you up in a delicious way.